Beltane or May Day is a fire festival symbolizing spiritual union and fertility. 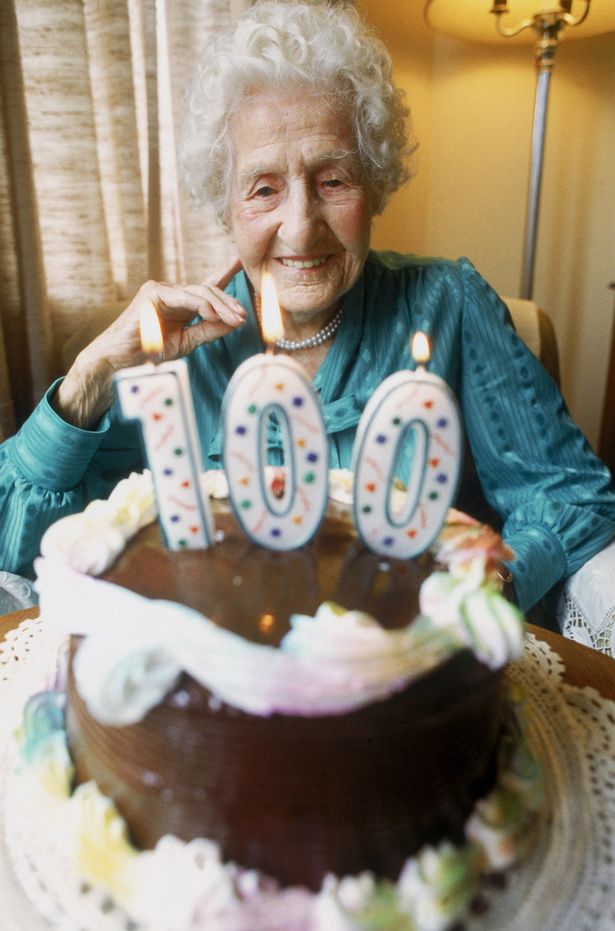 A lot of people are living to be over 100 years old these days so I thought I’d take a look at what might have been happening around 1917 (100 years ago) – what conditions existed at the time of their births that might have contributed to their longevity? And what does it mean for people born after that time – will we also live to a ripe old age?

The first thing to note is that the world was at war – and it was a pretty devastating global conflict. Austerity measures were a lot more severe than those experienced today. Food, medicine and basic security was in short supply. Young men everywhere were dying in the millions. About 20 million people were killed and another 20 million wounded between 1914 and 1918. Being an orphan must have been common place – certainly single parent homes were the norm.

In addition to World War I, diseases such as the Spanish Flu resulted in between 50 million and 100 million additional deaths worldwide between 1918 and 1920. For those that lived to see the year 1930, there was the experience of the Great Depression that plunged the world further into poverty. If war, disease, poverty and other deprivations didn’t kill the person, then by the time they reached early adulthood, say about 1940, the world was once again engulfed in a global war. Between 1939 and 1945, some 80 million people were killed and about the same number wounded.

It’s clear that any non-rich person born around 1915 who lived to see 1950 would have been incredibly strong, resilient, resistant to disease, and very, very lucky. Adding to their inherent biological strengths, there was far less pollution in this time frame – not a lot of cars, planes and smoke stacks. People worked outdoors mostly and ACTUALLY did physical labor. Sugar was in short supply and there were no GMOs (yes globalists, GMOs are bad for you). 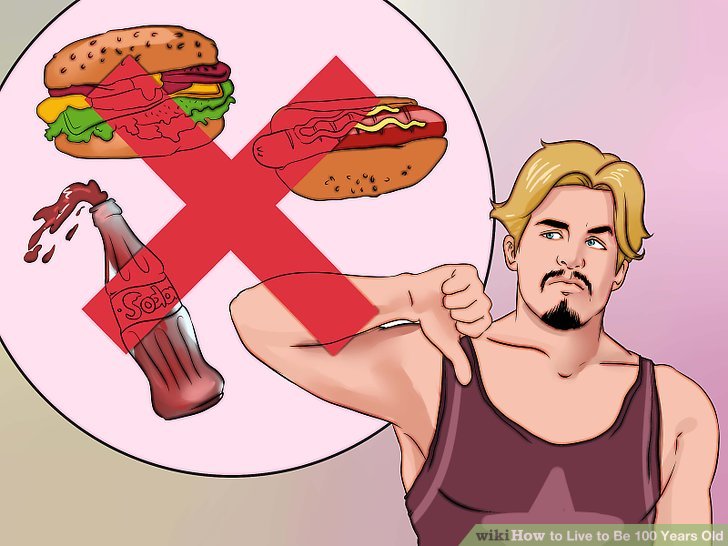 There was no TV, no cell phones, no personal computers, and people interacted with others more directly. Being self-sufficient and energetic were positive traits – no “snowflakes” in these years, at least none anyone took seriously. People got up, went to work wherever they could, fought for what they wanted and didn’t expect a free lunch from the government.  Hence, they lived a long time and most often remained productive into their 90’s.

Based on current events and news reports, it seems the general population today is pretty weak and insecure compared to previous generations. Indolence and whining are common place with the youth, especially in the western world. I don’t have a lot of faith in the core strength of my generation and none in the so-called “millennials.” Unless there is some medical or technological breakthrough – a breakthrough that is accessible to the middle class – I don’t see the common person living a long and healthy life. But if we can learn something from the past and emulate at least the attitudes of our grandparents, we might see some improvement. Nothing really stops us from living to be 100 except for the weakness of our own feeble will. 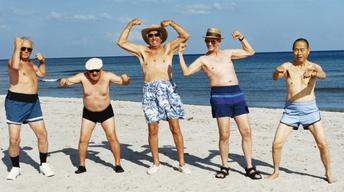 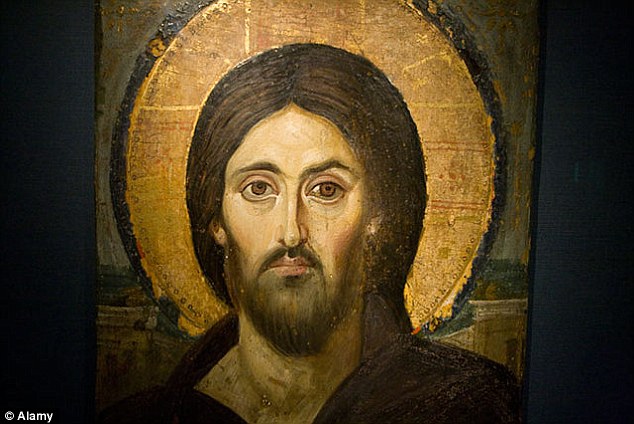 People around the world are familiar with the life and work of Jesus Christ. He is the founder of Christianity and billions of people venerate Him as the Son of God and Savior of the World. However, Christians are not the only people who revere Him – One of the things that makes the Master Jesus unique is that several other world religions accept His ministry and even claim Him as one of their own.

The Jews, of course, acknowledge Him as a fellow Jew, a Rabbi, preacher and even a prophet who helped clarify aspects of Judaism and brought attention to the teachings of the Torah. Many Buddhists also declare that He must have been a Buddhist monk, as His teachings align quite well with Buddhist doctrines. Hindus also honor Him as one of their own spiritual teachers and tell stories of how He lived, studied and was even buried in India. 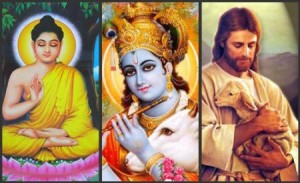 And Islam, as stated in the Quran, sees Him as a holy prophet and teacher who lead many Muslims of His time to Allah.

Even non-religious people acknowledge that He was a good and pious man who taught many universal truths and helped shape western civilization. Nowhere is He seen as evil or a corrupting force. His teachings of love and forgiveness are respected by all.

But our Jesus is unique for another important reason – one of cosmic and universal significance. He is the only founder of a major world religion that offered up His life for the sake of humanity. 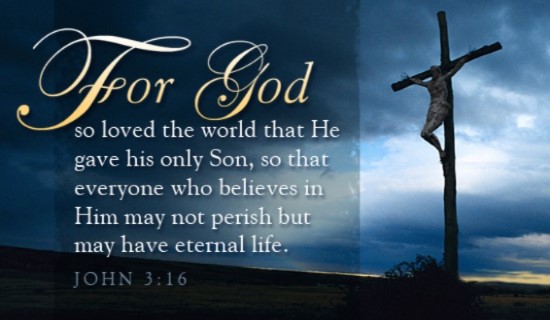 Moses lived to a ripe old age, and was buried by God. Buddha lived a long and fruitful life and, although he appears to have been accidentally poisoned, did not die a sacrificial death in any sense. Krishna and other Hindu deities are somewhat immortal and so cannot be said to have died at all. And Mohammed, though he might have been murdered, died an old man without offering himself up as a sacrifice for the world.

No, only our Jesus has the cosmic distinction of dying for the salvation of the world. His resurrection is a sign of our own potential for eternal life. And Jesus continues as Defender of the Human Race against the forces of evil and death.

We celebrate Easter in commemoration of His life, sacrificial death and resurrection and the promise that, through Him, all humanity can have eternal life. 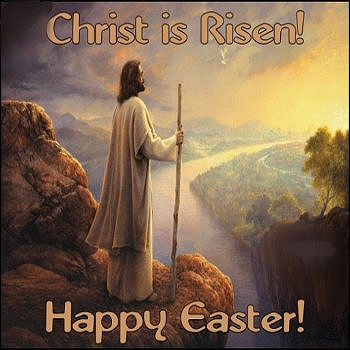 OK, I actually didn’t vote for Donald Trump because I don’t live in the U.S. But I would have for one important reason: he took a stand against Globalism.

It isn’t a powerful stand, and there is no chance he will stop the Globalist agenda – but at least he took a stand. None of the 16 republicans that ran against him were opposed to Globalism and Clinton and Obama are the poster children for the Globalist movement – but Trump did voice his disapproval of the Globalist agenda and if you’ve read the novel 1984 you know where Globalism leads. 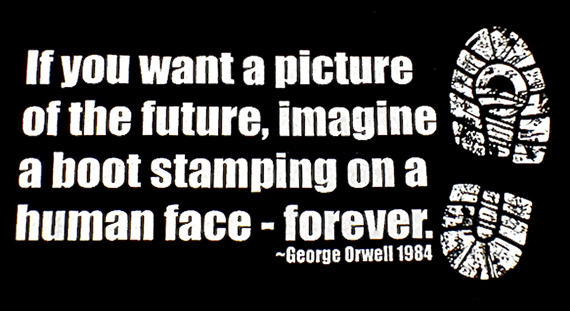 Globalism is basically Socialism on steroids. A Marxist/Globalist paradise would consist of everyone in the world living and working together on a farm/collective that is OWNED by the State – a State controlled by elitists like George Soros and the late, unlamented David Rockefeller. 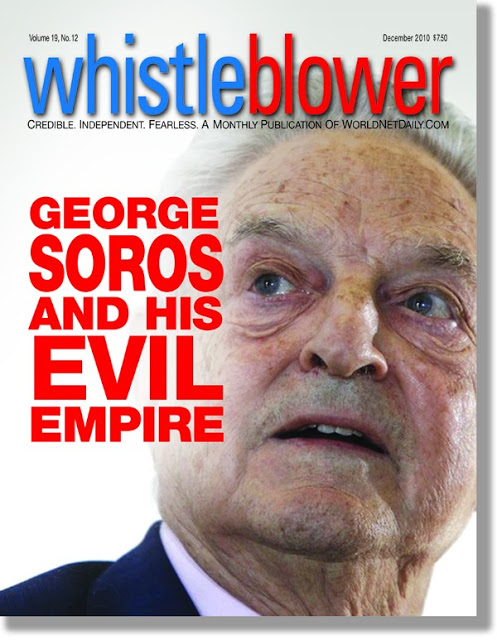 The Elites would dole out rewards and punishments to people based on their interpretation of what is good for the State. It would be a world not based on merit but on influence and “pull” – if you are in good with the Elite you get what you want – if not, you don’t. The motto “From each according to his ability and to each according to his need,” as twisted as that statement is already, would be twisted even further based solely on the whims of the Elite and their sense of what is “good.” It would be like a medieval feudal state where the serfs work the land for the pleasure of the lords in their castles. Globalism, in fact, is a cyber-enhanced, more malignant and farther reaching version of feudalism. 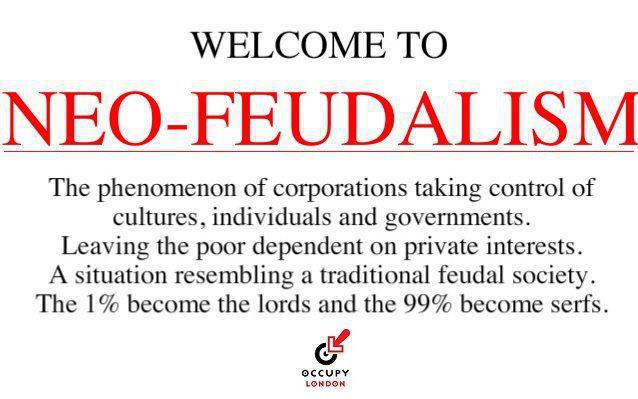 Unfortunately, Globalism seems to be inevitable. President Trump might be delaying the ultimate rise of the Global State, but he is not stopping it completely. To really attack Globalism you have to confront head on the banking cartels and plutocratic elites in organizations like the Federal Reserve, the International Monetary Fund, the Club of Rome, the Trilateral Commission, the Council on Foreign Relations, the Bilderberg Group and related sinister networks. He’s not doing that, not so-far, but the wall of Nationalism and Populism that he is building is, at least, a temporary obstacle to the advance of the New World Order – and that’s worth supporting and voting for. 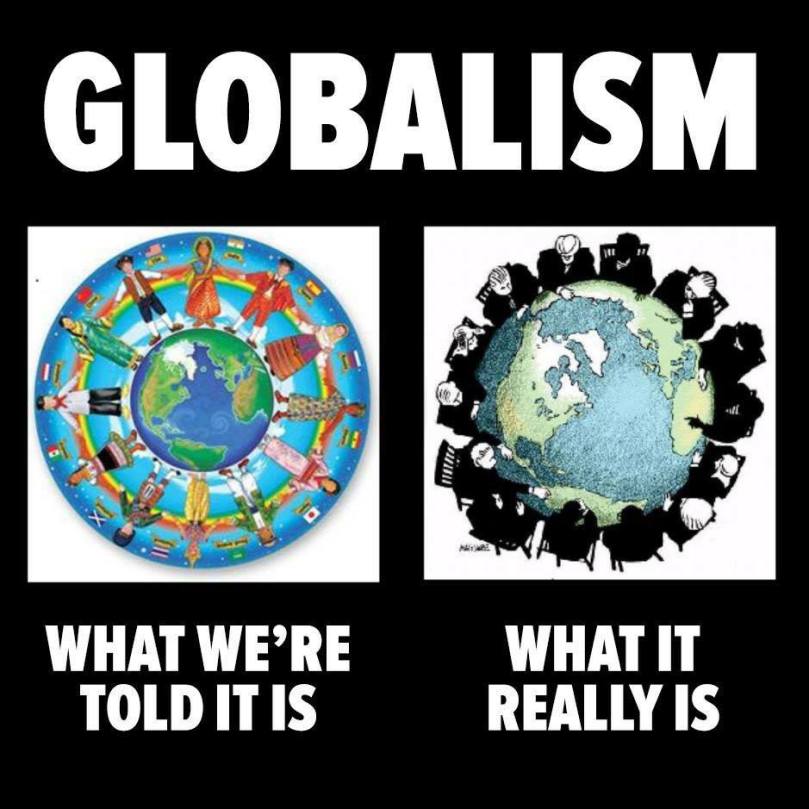 Hopefully other leaders in Europe and the rest of the world will pick up this agenda and maybe the next U.S. president will continue the effort to curb Globalism and keep the world free of feudal servitude. Hopefully.

Maybe I’m alone in this but I do not want a One World Government – I don’t trust that prospect. I don’t want someone like Angela Merkel or Justin Trudeau managing the world. 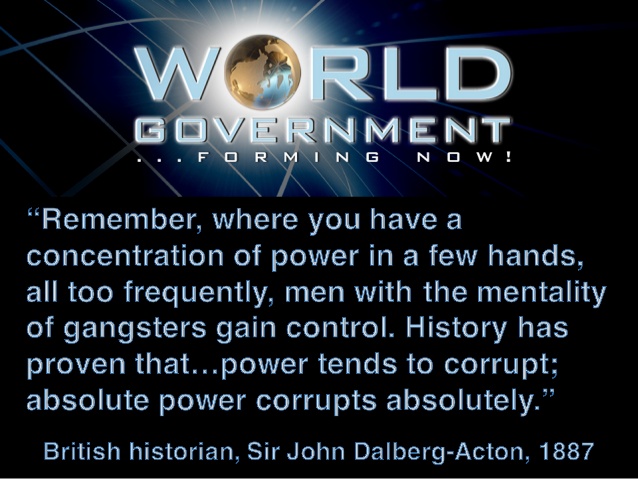 I don’t even want someone like Donald Trump doing it! Fortunately, Trump doesn’t want to be President of the World – he’s fine with being President of the United States and that’s another good reason to have voted for him. 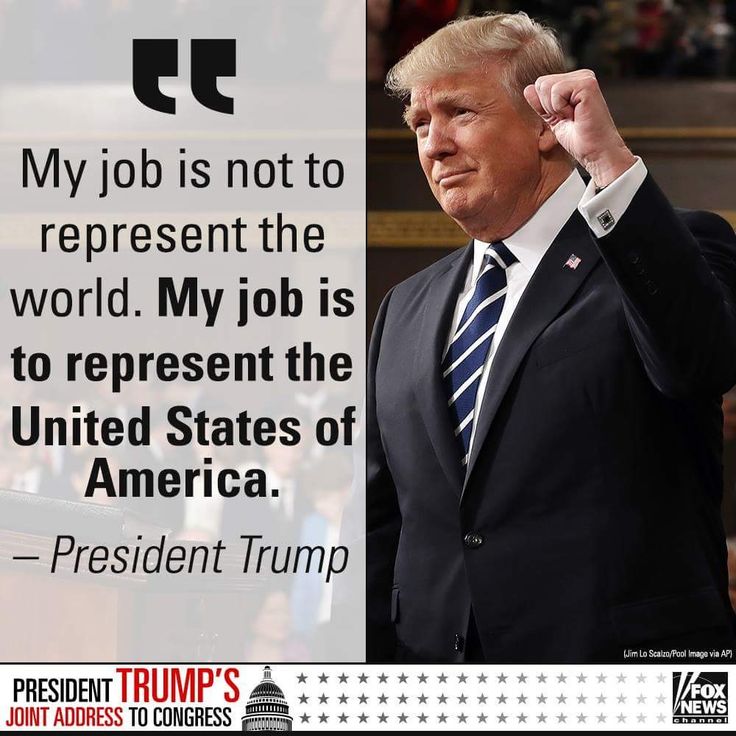 What can an ordinary person do to stop the advance of Globalism? Wake up! Wake yourself up anyway you can. Wake up and then wake up everyone else. This is our only personal defense against the forces that wish to enslave us. 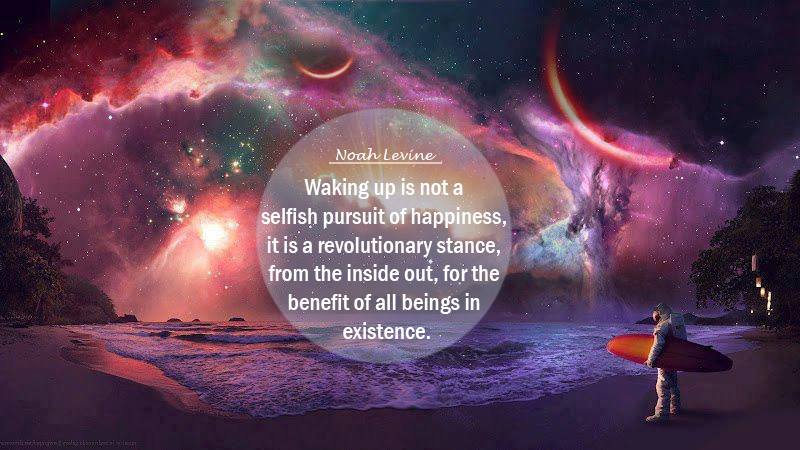