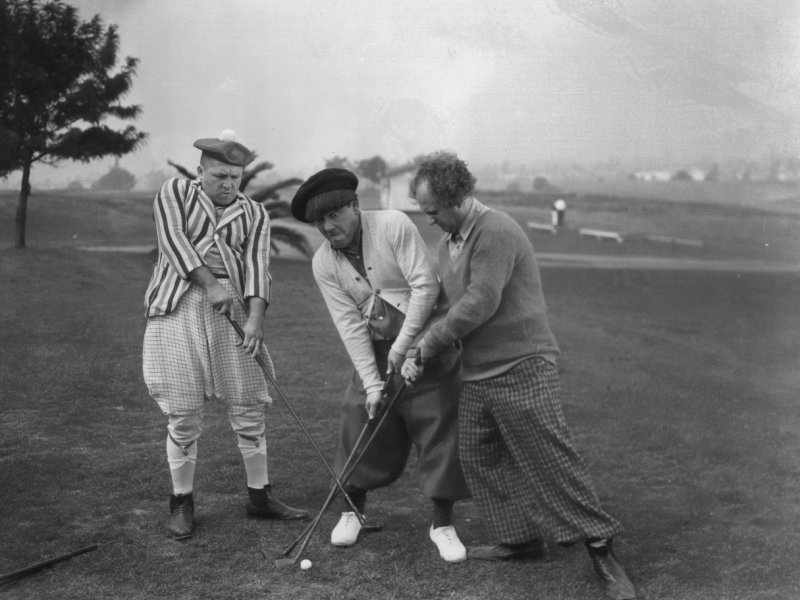 I’ve included a picture of the Three Stooges on this post because it’s funny. In reality, however, the Stooges have never committed any of the stupid acts listed here. They were way too cool and respectful of others to do anything this bad. The actions listed here reveal a complete lack of propriety, class and self-respect. They indicate bad upbringing, limited intelligence, social incompetence and major character flaws.

This is by no means a complete list of social stupidity – I’ve left out some major items such as war, racism, fanaticism, drunk driving and twerking. Maybe I’ll include them in a later post. For now I’m just addressing behavior I am forced to witness almost every day in public. There is no excuse for these actions. If you, the reader, are guilty of any of these items please stop and re-evaluate yourself. These are the actions of a goon. You know better, or you should know better – so stop. If you know other people who do these things then tell them to stop. If they get mad at you just show them this post. Tell them I told you to help them become better people. Put the blame on me – I have big shoulders. We’re all forced to live together on this small planet – let’s do it with dignity and a sense of self-worth. 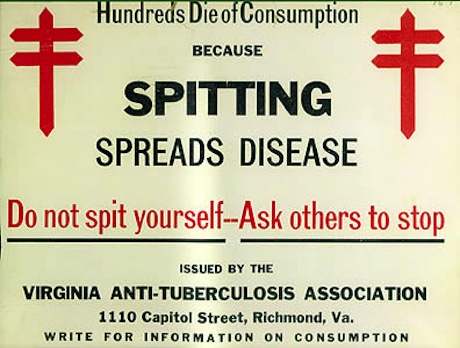 Spitting is a sign of disease. No one spits unless they are sick. If you are ill, please get medical help and carry around a spit cup of some sort. Be aware that no one wants to be around your disease – it is likely contagious. Don’t spit in public. If you think you are healthy and still insist on spitting then clearly you are a goon.

Again, no one wants to be around you – no one with self-respect anyway. Don’t spit in public. If you can’t understand what I am saying – it’s because you’re stupid. 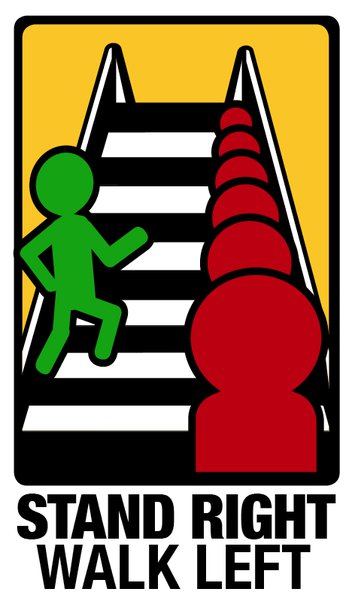 This is a simple strategy that has been around a long time. When you get on an escalator, stand on the right and leave room for people to walk up the left hand side. Just like on the road, slow traffic stays on the right and the left side is the passing lane. It’s pretty basic, yet so many people just don’t seem to get it. What’s wrong with you? If you can’t understand the importance of this concept – it’s because you’re stupid. 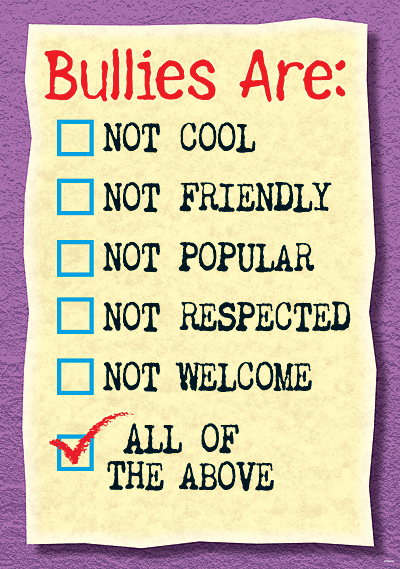 What the hell? Why do I even need to include this? Are you emotionally disturbed? Get help! There’s plenty of it around these days. Bullying of any sort is not acceptable in any type of society. That includes physical, verbal, emotional or even cyber bullying. When you pick on people for any reason you indicate that you are a total asshole. That’s right – an asshole. There is no other way to describe you. Stop it! If you can’t understand why bullying is wrong – it’s because you’re stupid.

4.   Backpacks on the subway

Listen, goon, you are not the only person in the world. Even if your own particular psychological disturbance makes you think so. When you are on public transportation or in any crowded place – take your back pack off! Put it down at your feet. Leave room for others. We all have to share space. Believe me no one would be around you if they didn’t have to be. People are forced to congregate in small spaces out of necessity. Be a decent human being and leave room for others. Stop being a goon. If you can’t understand this concept – it’s because you’re stupid. 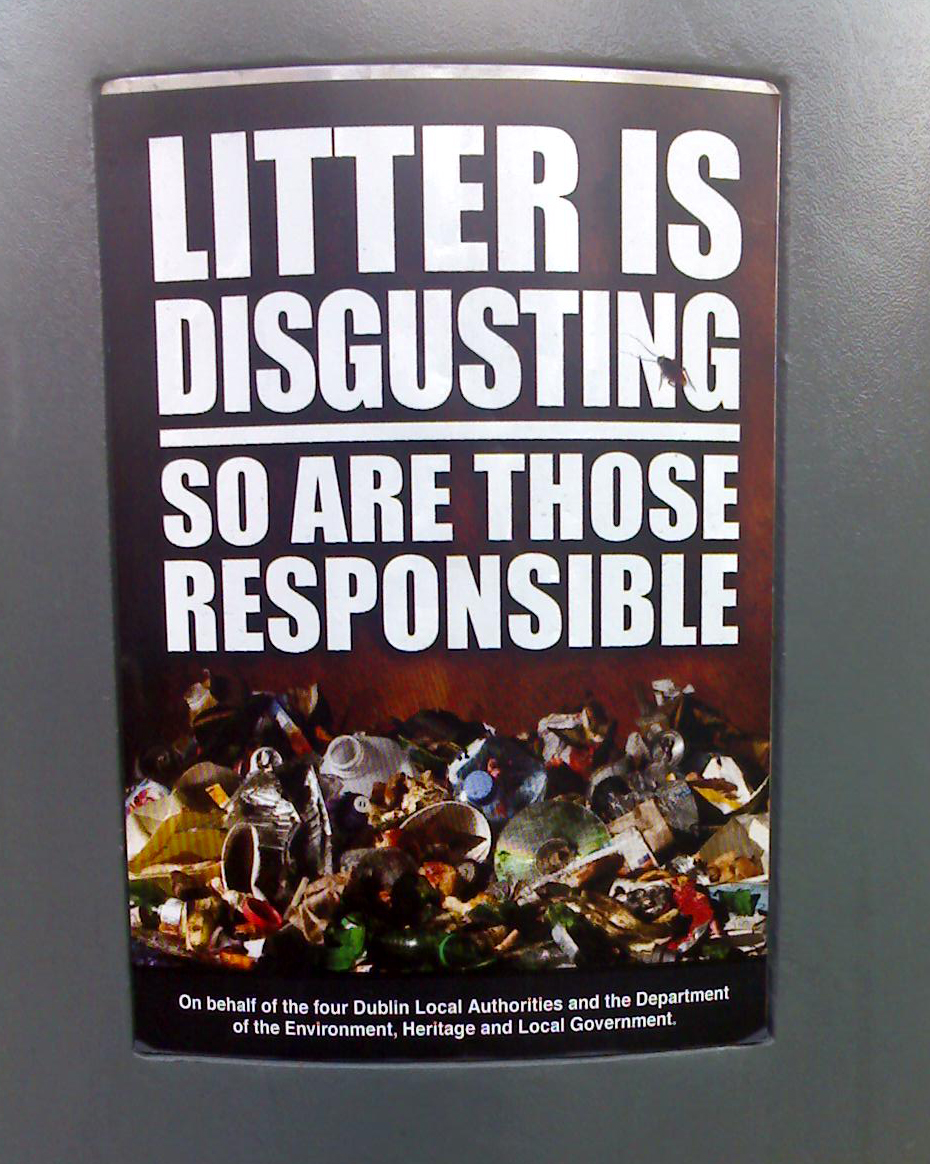 Again, let me remind you that you are not the only person in the world. If you want to befoul and despoil your personal space in private, then fine, do so, be a goon in your own environment. But when you are in public stop and think. No one wants to look at your garbage, no one wants to see the kind of loser you are. If you need attention, join the circus. Just keep the public areas clean. If you can’t understand why littering is wrong – it’s because you’re stupid. 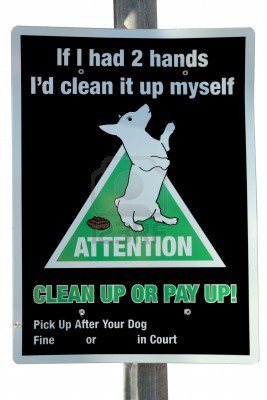 When sharing your life with a pet, you should accept a certain level of responsibility. Just as you should pick up after yourself, you must also pick up after your pet. If your pet craps on the street, or worse on someone’s lawn, do the right thing – stoop and scoop. Pick up the poop. If you don’t want to do this, don’t have a pet. Don’t be a goon. If you can’t understand this concept – it’s because you’re stupid. 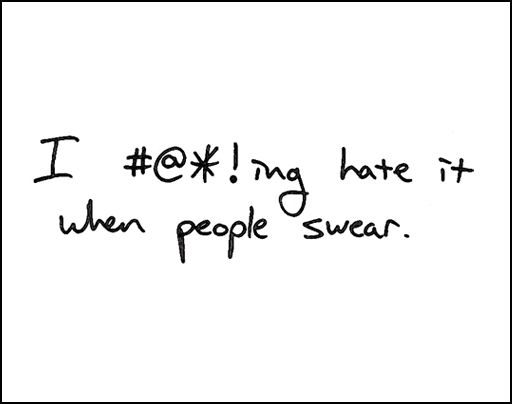 It used to be just sailors or people that had tough jobs that often put their lives at risk that would swear in public. Now even teenage slackers do it. Stop! It is not cool! There are a million words in the English language – if all you can use is the same 5 or 6 words to express yourself, you need help. Go back to school or read a book. Stop being a goon. When you swear in public you are demonstrating your total lack of class. If you can’t understand this – it’s because you’re stupid. 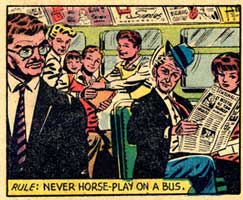 Perhaps something even worse than swearing in public, is jumping around like an idiot. Once you reach the age of 3 you should develop some self-respect and self-control. Be a jerk on your own time – not when you are around other people. No one wants to see you discharging your hormones – no one with class anyway. Anyone at all with a choice would rather not be with someone like you. Stop! Maintain some discipline. Show some understanding of propriety. If you can’t understand this – it’s because you’re stupid.

I’m pretty sure that most people should not be allowed the privilege of having a pet. Unfortunately, in our perverse society any idiot can buy or capture an animal and keep it. If you are going to care for a non-human being, show some class – don’t be a goon. I can’t cover every point of stupidity I see when people and animals get together, but here are a few: 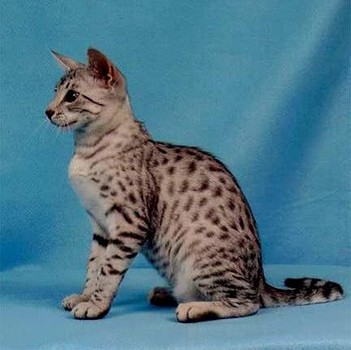 Cats are not slaves and cannot be tamed. They are natural beings. A cat cannot do anything wrong. They are not capable of it. A cat being a cat is perfect in itself. Get this clear in your mind. If a cat does something you don’t like such as scratching the furniture or pooping anywhere outside the sandbox – even in your shoe – it is your fault. You are doing something wrong. Your aura, your psychological profile is flawed and you are causing a disturbance in your environment – the cat picks up on this and responds to it. Get your life under control and the cat will not have to show you what an idiot you are. Learn to meditate. Anyone that punishes, hurts, or mistreats a cat is a bully and therefore a total asshole and should be set on an ice flow and pushed out into the ocean away from decent society. If you don’t understand this – it’s because you’re stupid. 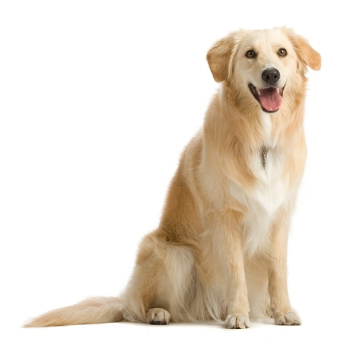 Dogs might like being part of a pack and following a leader, but they have the right to expect fair and rational treatment. Dogs don’t like sleeping in the cold. Maybe you saw a movie once about huskies out in the artic sleeping in the snow. Guess what, goon, you don’t live in the artic. And there is no way you have a purebred husky. Your dog wants to be inside with you – not that you deserve its company – give it a nice, warm, dry comfortable place to sleep. Even huskies would prefer not to sleep outside but they are forced to by idiot humans.  And don’t chain the poor thing up outside the store or whatever stupid place you’re going to. Leaving your loving pet out alone, exposed to every danger and inconvenience, with a short chain and muzzle, in the baking sun, rain, sleet, snow, or cold is not fair treatment. Only a goon would do that. And if a dog barks, it’s because it is trying to protect you. Again, because you are a goon, you probably don’t deserve the dog’s love and devotion. Yelling at the dog to shut up marks you as an idiot. Finally, when you take your dog for a walk and it sees another dog – let it say hello. Don’t be a controlling freak! Give the poor thing some space – take two minutes out of your oh so important life and give the dog a chance to be social. And, as with cats, anyone that punishes, hurts, or mistreats a dog is a total asshole. If you don’t understand this – it’s because you are really, really stupid. 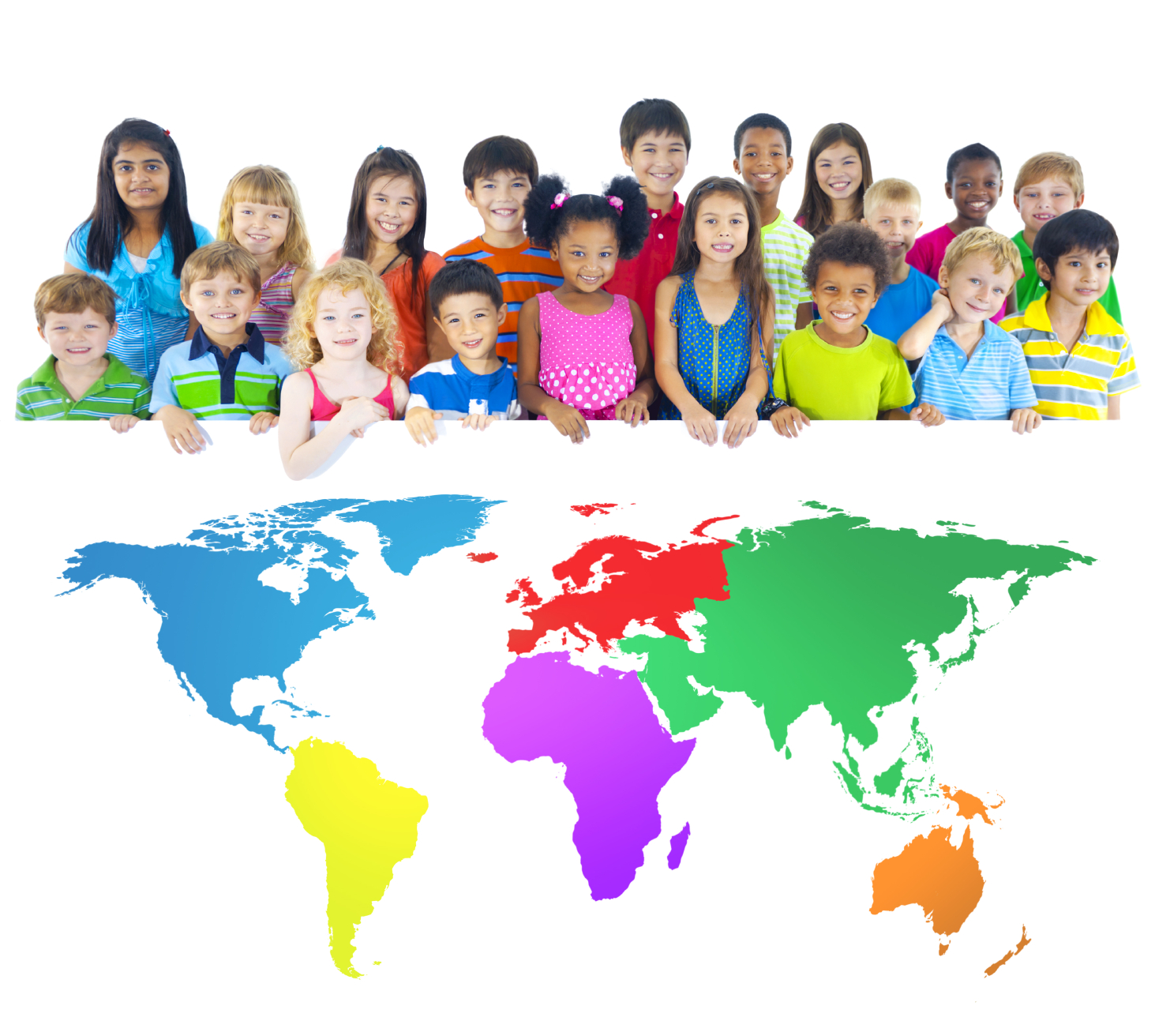 This is another item I should not have to mention. Unfortunately, there are far too many people out in public who simply should not be around children. Children are a public trust. They are the future of the world. They are the reason people strive to build up society. If you treat them badly, you are a despicable person. Show them by your example what a good person should be and they will grow to be good people. It is a tragedy that I must include this item on a list of social stupidity. I shouldn’t have to. I should never have to even hear of children being mistreated. But they still are – even in public. It is worse than a crime – it is a blotch on the soul of humanity. If you can’t understand this – it’s because you are worse than stupid – you are blight on humanity and being cast out on an ice flow is too good for you. 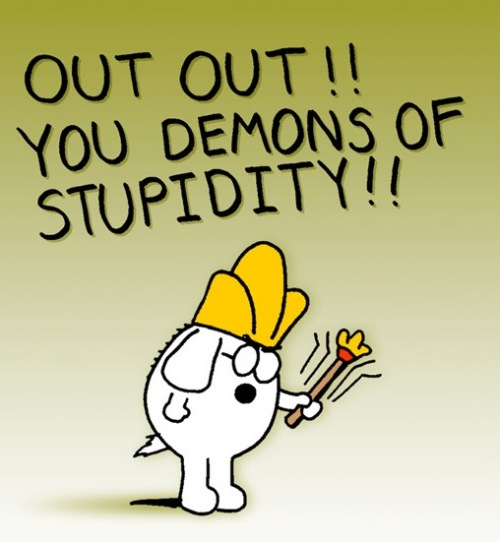