There’s a picture or meme circulating on the Internet. I don’t know who originated it or how long its been out there, but it’s a great image.  It depicts Alice from “Alice in Wonderland” talking to Dorothy from “the Wizard of Oz.” Both of these girls have seen some “weird shit” and really have no one to talk to about it – except each other. Unfortunately, they live in completely separate worlds and NEVER had the opportunity actually to meet (although I’m sure there is some fiction somewhere that has them connecting.) In their own worlds, everyone they ever shared their individual experiences with would have thought they were crazy or just victims of over active childhood imaginations. A shame. 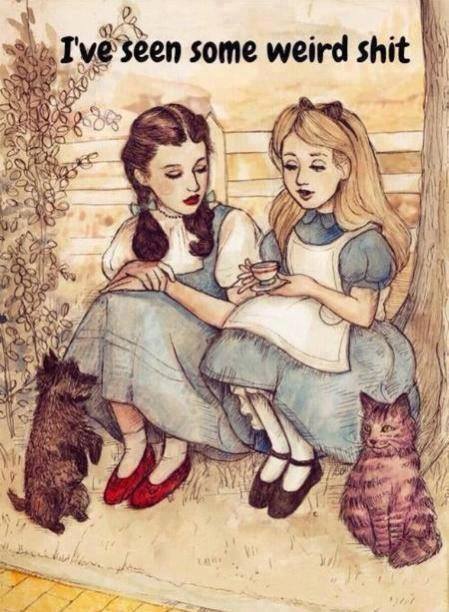 As a mystic I can relate to this image – maybe, a little too well. No, I’ve never been to Oz or Wonderland but I have experienced “weird shit”- I have been to other worlds. Most people on a mystic path will eventually encounter something strange and unexplainable. Its not always as wonderful as you might desire. Imagine how terrified Dorothy should have been seeing wicked witches, fearsome wizards, flying monkeys, or even talking scarecrows. Fortunately, many of the strange things that mystics experience, especially when they are new to the Path, aren’t so bad. These might include body tingles, lucid dreaming, euphoria, open mindedness, acceptance, and a weird sense of joy – all of which are quite common. After these experiences, when the senses are somewhat attuned, and psychic energy is flowing more easily, it becomes possible to start ‘seeing’ or ‘feeling’ things around you that go unnoticed by others – usually more vibrant colors, more depth in objects, a peculiar sensing of people’s moods and intentions. Occasionally, and often when unexpected, objects or beings from other realms might be perceived as intruding on your space. Communication with people from distant places or times might also occur. There are, of course, various exercises and practices that allow you to deliberately seek out new experiences through activities such as out-of-body travel, astral travel (not the same thing) or merging with universal intelligence. Anyone who has traveled awhile on the mystic path knows about and accepts these occurrences. There are also more uncommon, higher level experiences that adepts encounter and can only be shared or communicated with other adepts.  However, there are less extreme experiences that are unique to each individual, unique to one’s own sensibility and development. These are common to some, uncommon to others, and are best left unshared. One relates to the actual content of any communication with other beings. If you encounter a spiritual master on the path the words and images shared might only be for you. There is a gospel song called “In the Garden” that expresses this concept – the chorus is:

Long ago I was associated with a particular mystical lodge group and I was giving a presentation on the enlightenment experience. I described it as being like turning off Niagara Falls, then standing at the bottom and turning the water back on – a terrifying, crushing sensation that at the same time is exhilarating and liberating as one merges with the deluge and then emerges into the eternal sea. After my talk, one member took me aside and said he didn’t agree with my image. Not having been through the experience himself, he said that if enlightenment was to occur it must be a peaceful, loving process. But another, older, member was walking by and overheard the statements. He said I was correct in my image – the move to enlightenment can sometimes be a frightening, even painful occurrence.

I was young at the time and did not realize that I should have latched onto that older gentleman and pumped him for more knowledge and understanding of the mystical path. I thought everyone I met would have had the same experience. This is not the case. The end result (to the extent we can talk about ‘an end’) might be sharable – but our individual journeys are unique. Knowing too much about another’s journey is not always a particularly good thing. We might start to question our own advancement if we compare ourselves to others: if we depend on another’s travels to justify our own. Each of us, ultimately, travels the narrow path alone. As it is I have not met another person in the flesh who exactly shared my revelations (though I have read about similar events in people’s lives) and my spiritual contacts ignore my materialistic desires to find companions on the path.  The reality is that many of the things that happened to me ‘beyond the waterfall’ can never be discussed openly with anyone. The mystic path is a lonely one – at least, a solitary one. Like Alice and Dorothy, and those that walk ‘In the Garden,’ the things we encounter on the path, however wonderful or weird, can’t be communicated to, or understood by, those that have not experience similar weird shit.