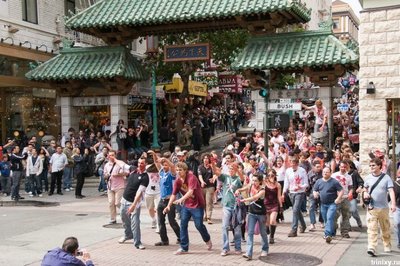 I seem to be obsessed with zombies these days. They’re scary and they are everywhere. There are zombies on TV, zombies in movies, zombies in books – even zombies on the streets. Scariest of all, there are even real life zombies that move among us – camouflaged, unseen but very present. These real zombies are people just like you and me who have abandoned their will and purpose in life and accepted the blank staring, mindless slavery of the damned.

Yes, zombies are everywhere and their numbers are growing. It is true that most of humanity is sleepwalking through life – but the zombie is someone who has given up even the pretense of dreaming. The zombie no longer truly lives, it merely exists. It is a scary proposition yet one that many people seem to embrace. Why? Why is the zombie fate so popular – especially among young people?

There actually are some positive aspects to being a zombie – dubious as they may be.

Perhaps this last point is the strongest – for anyone struggling with issues of identity and self-worth and the feelings of being an outcast and not belonging – suddenly being part of an accepting group – even a mindless horde – is a deeply appealing prospect for so many people.

And what are the negatives to being a zombie? Ayn Rand mentions a big one “Your self is your mind; renounce it and you become a chunk of meat ready for any cannibal to swallow.”

To be a zombie means to renounce your mind and with it surrender all humanity and any possibility of real love, vitality, satisfaction and self-expression in life. These things cannot exist without the mind and soul, without consciousness. To be a zombie you must give up the possibility of ever being awake, alive and in control of yourself. 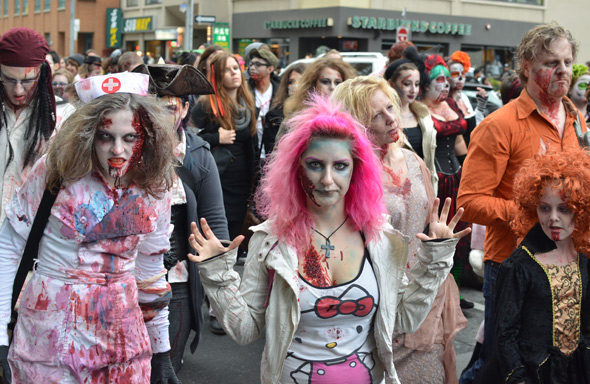 For anyone with a mind, the zombie life is scary and depressing. Yet the numbers of zombies are growing. More and more people around us appear to be opting out of the human race in favor of the non-life of the zombie. A few just play the game of dressing up and acting like the zombies in the movies. But many, many more are taking the camouflaged, invisible but common zombie route – they join gangs, cliques, and clubs with strict, often violent, rules and guidelines of behavior; they immerse themselves in political and religious ideologies; they give up all self-determination, free thought, and individuality and behave and react exactly like all the other zombies. They might not eat the physical brains of the living like they do in the movies, yet their mere presence sucks out the minds and souls of the people around them.

Zombies are perpetual consumers. They gorge themselves on sugar, alcohol, tobacco, drugs of all kinds, deviant sex, the so-called entertainment media, and all the glitter and bling of the world. Modern zombies succumb to obsessive, violent and primal urges and serve and defend the governments and religions that support and perpetuate these urges. They lessen the world and shatter the hopes and dreams of all who try to experience and enjoy real life.

How do you avoid becoming a zombie? If you are a sleepwalker like most of humanity you must first wake up. Wake yourself up by whatever means possible to you and then wake up others. The more awakened people there are the fewer sleepwalkers there will be that can be infected by the zombie plague.

Wake up now and perhaps the world will be saved.

The Fight for Mediocrity